Charlie Chaplin inspired Dan's career, and Dan returned the favor by training Robert Downey, Jr. for his Oscar-nominated performance as the comic legend and writing several acclaimed books analyzing Chaplin's artistry, including The Comedy of Charlie Chaplin and Charlie Chaplin's Red Letter Days. Dan shares his insights into the comic legend in three entertaining live programs, each of which includes the screening of a newly restored Chaplin masterwork.

These programs thrill audiences because the restored Chaplin films are a revelation, and, as Robert Downey, Jr. says, “Dan's insights are amazing.”

In 1914 World War One shook the world with bombs and Charlie Chaplin shook it with laughter.  In Charlie Chaplin's Red Letter Days you'll discover the surprising ways in which the great comedian affected the Great War and vice versa.  The program includes the screening of a newly restored print of Chaplin's blockbuster war comedy Shoulder Arms, released while the bloody conflict was still raging.  Don't miss this fascinating excursion into the public and private worlds of the comic legend whose films still make audiences roar with laughter.  Click the poster for a preview.  This program can also be presented as a live online event.

In Funny Bones Dan peels the layers of a Chaplin comedy classic, The Pawnshop, to reveal the secrets that keep it fresh, funny and surprisingly relevant a hundred years later.  You'll learn all about Chaplin's remarkable body language and brilliant visual comedy, and you'll also see some brilliant sleight of hand and visual comedy from Dan. This program won't just change the way you look at Chaplin's world—it will change the way you look at your own as well.

In 1921 Charlie Chaplin's The Kid took the world by storm.  The story of a penniless tramp who adopts an abandoned infant struck a powerful chord in the aftermath of a devastating war and equally devastating pandemic which left millions dead and thousands of children orphaned.  In The Kid at 100 Dan reveals what keeps this film fresh, funny and incredibly moving to this day. The program begins with the screening of a beautifully restored print of the film, followed by Dan's illustrated talk and a lively audience discussion. This program can also be presented as a live online event. 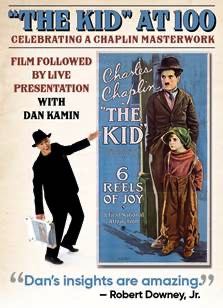