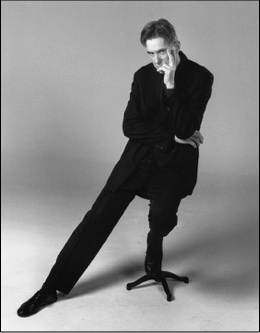 Dan has performed at hundreds of colleges, including Swarthmore, Amherst, Florida State, University of Maryland, Ball State and repeatedly at the twenty-campus Penn State system.

One reason Dan's college visits are so successful is that they always feature a surprise appearance by Mr. Slomo, who causes a stir by gliding through the crowded dining hall in eerie slow motion, stopping occasionally to astound students with silent, mind-boggling sleight-of-hand magic. Of course, this generates tremendous buzz, and guarantees a good audience for the main event, Comedy in Motion.

There Dan breaks his silence and comes clean, hilariously "exposing" the secrets of magicians, offering valuable lessons on how to impress women, and demonstrating surefire ways to get kicked out of fancy restaurants. More than mere mindless entertainment, Comedy in Motion is an educational experience--as well as being mere mindless entertainment.

Whenever possible, Dan goes beyond the usual "hit and run" approach taken by most campus entertainers by staying around for several days. College students relish the opportunity to interact with someone who's played an important creative role in movies they love, like Benny and Joon, and Dan shares his insights and experiences in engaging, hands-on workshops, class visits, and Funny Bones, his full-evening "class in comedy."

A living special effect, Dan Kamin conjures up the glamour of Hollywood through the magic of live theatre.

"A flawless program, an amazing performance, the only performer in recent years to earn a standing ovation.  After the show dozens of audience members swarmed around him to ask questions and get autographs. I strongly recommend Dan Kamin."

"Rare and amazing, like a breath of fresh air...creatively unique...his show was an experience not to be overlooked...his fifth visit to Benedictine...a definite treat."