A  RESIDENCY THAT ROCKED

"Thanks for your recent residency, which reached an impressive number of people in our rural upstate Florida community. I know we threw you a curve ball, so to speak, by scheduling your Kiwanis Club appearance in a bowling alley. We did this to attract new members, and it certainly did that. Despite the unlikely setting, your program turned out to be right up our alley (sorry, couldn't resist). It was one of the best gatherings we've ever had. Your bogus 'stress management' tips proved beyond a doubt that laughter is the best way to reduce stress.

"The following morning you proved it again. As The Pantomime Man you kept an audience of

"These and your other local appearances certainly helped to swell the audience for the main event,

Funny Bones, The Comedy of Charlie Chaplin. This program proved to be informative, entertaining,

engaging and personal all at once. The fusion of film with live performance and audience interaction was

impressive and fascinating. In addition to many from the community who have never attended our Artist

Series before, it was enjoyed by a sizable audience of seniors from our local retirement community. The

show is a fitting tribute to Charlie Chaplin, the greatest comic of the 20th century. Thank you for carrying

his tradition into the 21st through your dedication to the art form you so skillfully represent."

ANOTHER RESIDENCY THAT ROCKED

Dan's visit to Colorado Springs proved how a well-designed residency can generate public awareness and new audiences for the arts. This exemplary residency resulted in a sell-out crowd at the 2000-seat Pike's Peak Center for the Performing Arts (people were actually turned away at the box office).The residency was organized by the Kennedy Center Imagination Celebration, the area's premier presenter of theatre for young audiences. Masterminds Mary "the Merciless" Mashburn and Beth Fox-Kret collaborated with Dan to create a model residency week.

It began at a high school, where an anthrax scare an hour before the show did nothing to curb the students' enthusiasm for Dan's movement and sleight-of-hand skills (the mystery package turned out to be an innocuous PR tape from the Saudi Arabian embassy). As the week wore on, Dan put on a special silent program at the School for the Deaf, visited the hospital as the goofy "Dr. Dan," and appeared on television and radio. He took a slow-motion stroll through a shopping mall, startling shoppers and generating more buzz about his presence in town.

Mid-week, Dan presented his Charlie Chaplin program, Funny Bones. Several hundred people showed up for an evening of insight and laughter, featuring classic Chaplin clips and Dan's own comic moves, accompanied live by local composer-reporter-pianist Mark Arnest. The sponsor of the residency, Fleet Credit Card Corporation, was treated to one of Dan's favorite scams, his stressed-out stress-management expert. Expecting a class, employees instead learned that the best kind of stress reduction is laughter.

During all this Dan had been steadily rehearsing one of his Comedy Concertos, The Classical Clown, with conductor Gary Nicholson and the Colorado Springs Youth Symphony. Their hard work together was rewarded at week's end, as cheers and laughter accompanied their sold-out performance at Pike's Peak Center.

All in all, it was a memorable week in Pike's Peak. 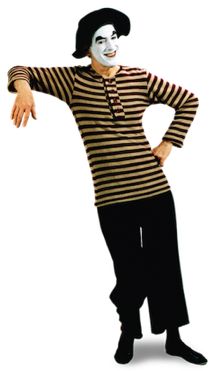 Dan works with presenters to create residencies that rock. Forget master classes. Because of his subversive sense of humor and strange skills, Dan is able to bring his art directly to the people in some unlikely settings. here are a few examples.  For full accounts of two model residencies, click here.

Scenes from a mall. When Mr. Slomo takes a stroll through the local mall --in hypnotic slow motion--people do double takes. This makes for a great photo op for the local news team.

Emergency medicine. "Dr. Dan" keeps everyone at the hospital in stitches, including the hard-working staff.

Sit down and shut up. Dan often appears before Rotary clubs or other business and community organizations as a speaker for whom things go horribly, embarrassing wrong.

Silent sermon. Dan has preached many a sermon in mime as part of church or synagogue services.  It's a great way to spread the gospel of the arts and let people know that something's up in the community.

Go directly to jail. Dan has brought his art to prisons, mental hospitals and juvenille facilities. He delights in performing for at-risk, in-need or outlying populations who normally don't get the chance to experience the arts.

Get a job. Dan can work his magic on factory floors and other workplace environments.

Funny Bones.  The man who trained Robert Downey, Jr. for his Oscar-nominated performance in Chaplin leads the audience into the enchanted world of Charlie Chaplin. As Downey said, "Dan's insights are amazing."

Sure, he'll do master classes. Of course, Dan offers lively master classes in movement and physical comedy for all ages and levels of experience.

Get into the act! You know your community. Conspire with Dan to shake it up. 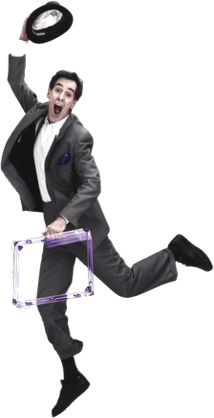