Dan calls his solo theatre program A Cheap Evening of Expensive Theatre. Critics call it "a breathtaking display of theatricality that's sharp, funny and highly inventive" (In Pittsburgh Weekly). It's a guided tour of the performing arts in which Dan sends up everyone from hyper-dramatic opera singers to smarmy, know-it-all magicians.

But this breezy postmodern vaudeville of physical and

Lancaster's New Era says, "Kamin has a biting wit that he

uses quite effectively to satirize our world and himself as

well. It's the kind of self-deprecating humor that only a

performer totally in command of his talents can have."

praises: "You made me laugh so hard that I got a

Among Dan's gallery of characters are dangerous drivers on cell phones, a magician who traps the audience in a web of deception as he tries to explain his secrets, and a puppet master who dances with his ultimate creation, a beautiful, life-sized doll, who has definite ideas of her own about the relationship.

Dan's comic and kinetic skills have earned him invitations to perform in theatres and arts festivals around the world, from West Palm Beach's Kravis Center for the Performing Arts to London's Battersea Arts Centre to the Springfield Arts Council in Springfield, Ohio.

Repeat invitations are common, and that's not necessarily a good thing. Because Kalamazoo's New Year's Fest hired him ten years in a row, there are now people in that town who can do Dan's show.

You can hire one of them if Dan's not available. 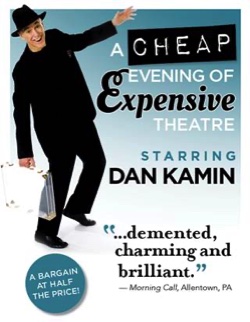